Diego Maradona LEAVES hospital in an ambulance eight days after

Spark Global Limited Diego Maradona has left the hospital in an ambulance just eight days after being admitted for emergency brain surgery. The iconic former Argentinian footballer has driven away from the private Olivos Clinic just before 6 pm on Wednesday as hundreds of fans of photographers tried to get a glimpse of him. Maradona was hospitalized last week and had to have an emergency operation to remove a blood clot from his brain. 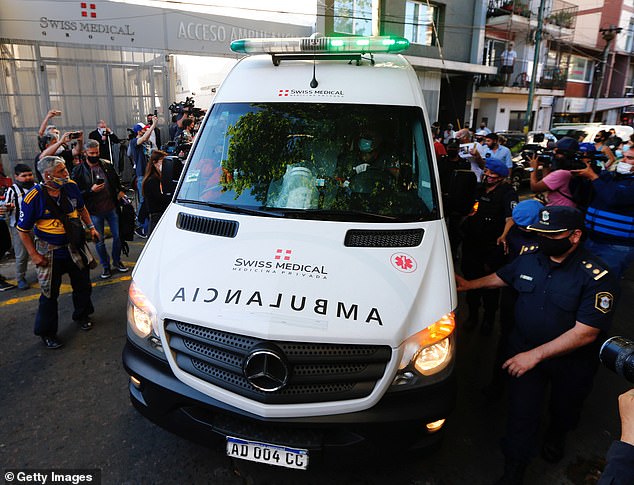 Argentinian TV reporters traveling on motorbikes filmed the ambulance carrying him leaving before following the vehicle to transmit every inch of his journey. His lawyer, Matias Morla, has said that the 60-year-old will continue to receive treatment for alcohol dependency. Maradona is expected to stay in a house near his older daughters. Maradona, who won the World Cup with Argentina in 1986 and is now the coach of Gimnasia y Esgrima in his home country, has been admitted to hospital on several occasions since his retirement.
His departure came just eight days after he was admitted for an emergency operation Maradona underwent an emergency operation to remove a blood clot from his brain.

He almost died of cocaine-induced heart failure in 2000 and underwent years of rehabilitation. Maradona, who was well known for having a wild lifestyle during and after his playing days, had a gastric bypass operation to lose weight in 2005 and was once more hospitalized two years later for alcohol-induced hepatitis. He also fell ill at the last World Cup in Russia, where he was filmed passing out in an executive box when Argentina took on and beat Nigeria in Group D.

Maradona began taking cocaine in the mid-1980s – during the height of his playing days, going on to develop an addiction to drugs and alcohol over the next two decades. His drug use began in 1982 and reportedly grew worse in 1984 when he moved to Napoli and had connections with the Camorra. In 2014, Maradona said of his drug use: ‘I gave my opponents a big advantage. Do you know the player I could have been if I hadn’t taken drugs?’ His first real punishment came in 1991 when he was banned for 15 months by Napoli after testing positive for cocaine. Later in the same year, he was arrested in Buenos Aires for possessing half a kilo of cocaine and was given a 14-month suspended sentence.

In 1994, Maradona was back in the fold with the Argentina national team, making headlines around the world for a now-famous screaming celebration into the camera lens after a goal against Greece. His tournament was to come to an early end, though, after he was expelled days later for testing positive for five variants of ephedrine, a banned substance. He was banned for 15 months, ending his international career. In 1995, he moved to Boca Juniors but two years later he failed a drug test for the third time in six years, putting an end to his playing career. Officially, a ‘prohibited substance’ is all that has been revealed about that test, but Boca president Mauricio Macri has said in interviews that cocaine was found in a urine sample. In 1996, Maradona said publicly: ‘I was, am and always will be a drug addict.’

In 2000, the footballing legend suffered an overdose, and in 2004 he had a heart attack. A year later, he was forced to have gastric bypass surgery, and in 2007 he was back in hospital again, this time suffering hepatitis. It is then understood he stopped taking drugs, telling a journalist in 2017 that he hadn’t taken drugs for 13 years and was feeling ‘great’. He has been drinking alcohol since 2004, though, hitting the headlines at the 2018 World Cup for his bizarre antics at a number of Argentina games. A video emerged of him drinking tequila on a plane, and he claimed he ‘drank all the wine’ ahead of their win over Nigeria.