In the early morning of February 25th, Beijing time, in the first round of the make-up match of La Liga, Barcelona beat the newly-promoted Elche 3-0 at home, ending all competitions in two games and still trailing Real Madrid by 2 points. Messi scored twice, scored 7 consecutive league goals, and enjoyed the top spot in the scorer list. In 2021, he won 13 goals and ranked first in the top five leagues. Alba also scored a goal. Blaisevette Barcelona’s first career with two assists in a single game.

Messi has scored more than 2 goals in 148 games in La Liga. This season, he scored twice in 5 games in La Liga, tying Suarez and tied for first place. For the first time in his career, Blaisvit Barça has two assists in a single game, and only one assist in the previous 40 games. 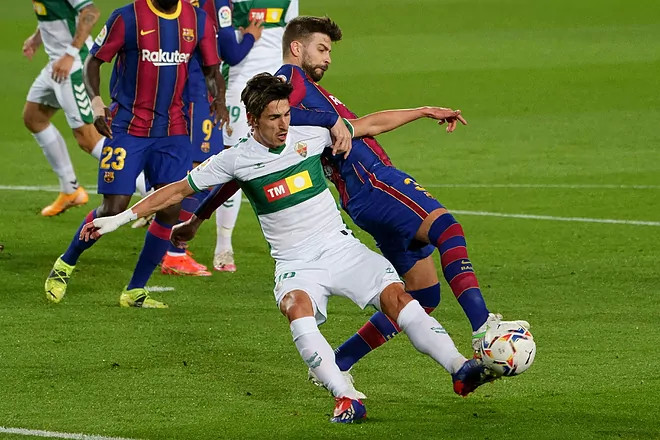 At home in the league against Elche, Barcelona had 21 games, 14 wins, 7 draws, and remained unbeaten, with 50 to 12 goals. Messi led the striker, Umtiti, Pjanic, Trincon, and Breiswaite played in rotation, and Griezmann and Dembele played on the bench.

In the opening 2 minutes, Messi knocked on the right side, Pjanic made the ball, Trinkone shot from a low angle, goalkeeper Badia fell to the ground and sealed the ball. In the 5th minute, Rigoni broke through the left-wing and knocked horizontally, Barragan leaked the ball, and Boyer volleyed with his left foot after adjusting the middle of the penalty area.